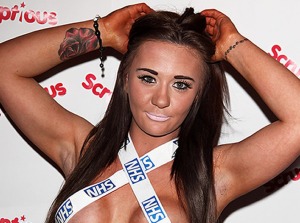 Just like Emmeline Pankhurst when you think about it.

The media (Gawd bless her and all who sail within her) has seen fit to bring to my attention a woman by the name of Josie Cunningham. For those unaware of this particular being, she managed to procure herself an artificially bolstered bosom at the expense of Joe “Tax Payer” Bloggs to launch a glamour modelling career and has since gone on to court the tabloids with all manner of shameless money-grabbing scandals, including offering to abort her baby to nab a place on a reality TV show. A class act.

Josie, with her tax-funded tits and taxis, has riled the nation to the point where some are now offering her their bitter pity where once a barbed tongue was lashed; I myself have revelled in referring to her as “a slack-fannied troglodyte”. She makes no secret of the fact that she is willing to sell her soul along with the tattered shreds of her dignity for a quick buck – and now tickets to see the tattered remains of her undercarriage, as four “lucky” punters shell out £30k for front row seats right there in the splash zone of her latest birth – the birth of the vagina spawn she conceived while working as a prostitute, no less. But is she really a victim of the media? Has she really been exploited and humiliated for the gains of the demon red-tops, or is this slack-fannied troglodyte laughing it up and proving herself the New Modern Feminist Hero?

Once you’ve finished choking on your middle class disdain and fat-free latte, allow me to explain. Sure, she is, at first glance, a vile creature, willing to debase herself to not even the highest bidder. Someone who sells column inches by virtue of their downright dislikeability, someone who has nothing of worth other than the bottom of their well-scraped barrel. But do you really think she doesn’t know that? This is a woman who realises she will never be a Marie Curie, shall never rival Dame Judy Dench and can barely spell Charlotte Bronte, but she sure as hell knows how to bag her five minutes of fame and more money than her kind has ever known.

This council estate trollop is laughing all the way to the bank with the pennies that the populace have thrown at her (via the media). We may have thrown them hatefully, as stones against her very public window, but does she care? Not on your nelly. This walking muck gutter is all too aware how to provoke a reaction from us and how to use that to her own ends. We, the high and mighty self-appointed judge and jury, are being played like well polished yet gullible fiddles.

Recently our New Modern Feminist Hero took to the Twittersphere to open up the floor for a Q&A. The resulting deluge of abuse was like Satan’s turn-out the morning after a poorly cooked curry. Pretty, it was not, but do you think she had expected anything else? To paraphrase Oscar Wilde, the only thing worse than trending on Twitter, is not trending on Twitter. Or to trend on Twitter because you died with a pineapple up your bum… (I may have added that last bit). The internet rose up to hate her and with it, brought yet another wave of media interest, just as she’d planned and just as countless other master media manipulators have done before – step forward Katies Hopkins and Price. Hate them, hate them more – they care not a jot from up there in their diamond encrusted mansions.

I know there are some of you wondering still how a woman prepared to sell her body to not just one or two men, but to a whole nation, can be anything like a feminist. Well, if she is using her femininity and her female organs to knowingly exploit a patriarchal society and its cut throat media, making enough dosh to support her offspring and her independence (in whatever way she chooses to exert that), then surely, isn’t she the very epitome of feminism? Cannot we say the same for those much derided glamour models and sex workers as a whole? We may judge her and slam her for doing what we see as degrading and “wrong”, but doesn’t that just mean we are trying to oppress her? Not very feminist of us at all.

So you see, Josie Cunningham may very well be the New Modern Feminist Hero and a role model to us all. Or she may just be a slack-fannied troglodyte.