Save The Eyebrow – A PFPT Appeal

I’m not normally one to champion a cause or back a charity in so public a manner, but I feel very strongly about this. The humble eyebrow, that most elegant of fuzzy eye adornments, is currently under serious threat and it needs your help now!

The poor innocent eyebrow is just one of a growing number of body parts to suffer at the hands of vanity and its numbers dwindle, not just from the ravages of the zealous over-tweezerer (it is SO a word!), but it is also under attack from severe oil slicks of marker pen, which choke and pollute this poor furry creature’s natural habitat. Once a wild and proud animal, the eyebrow used to be free to roam about the foreheads of the human race, but civilisation brought with it a need to cull these feral beasts so people could see where they were going and whether or not the thing they were marrying was in fact a man, woman, wolf or haystack.

While a mild culling helped these hairy beings multiply in number by cleaving the monobrow into two fully functioning, domesticated facial frames, the humble tweezer became an addiction for some eyebrow owners and abuse has now become so commonplace that people even pay for their brows to be tortured with hot wax or a barbaric system of threads that rip the facial follicles from their perch. These humble conveyors of expression are thinning out faster than a McRainforest. 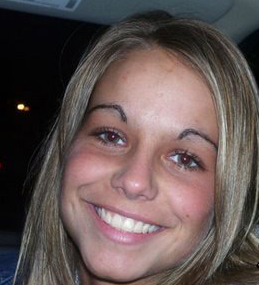 While the crimes against eyebrows are primarily of the facial pillaging sort, there is another manner in which the human race has cruelly defiled the majestic brow beast. Allegedly called “The Scouse Brow“, more commonly known as choking your forehead in a layer of ink, some have taken up a fashion trend that is akin to wearing a giant panda as a hat. Not just because is it putting an endangered species at risk but also because it looks utterly ridiculous! What possible reason could anyone with a heart (or a brain) have for choking the elegant eyebrow to within an inch of its life by drawing a graffiti oil slick over the top of it, giving the impression the wearer has just entered into fisticuffs with a Sharpie marker pen and come out of it the losing party?

The loyal eyebrow sits patiently above each of its owner’s eyes, waiting for a saucy comment to cause it to sit up and beg, or for a terrible outfit to walk past, causing it to twitch judgementally, and there they do no harm, yet still the cruelty of man causes is to be shaved clean off and an imposter drawn crookedly, 2 inches higher than any brow should reside, resulting in the owner looking perpetually surprised, like they’ve just had a rhinestone brogue shoved up their bottom. I know that’s a terribly specific analogy but it’s a terribly specific facial expression. 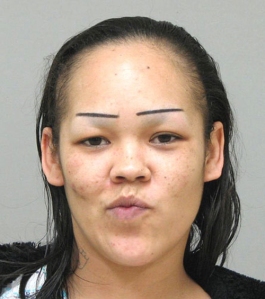 “Tragic scene, all too common.”

Save The Eyebrow is a charity that has been started up to raise awareness of this humble face-nester’s plight and to stop the atrocities that humans inflict upon it. I’m not alone in my support for this worthy cause, very real famous celebrities have also spoken out about this facial travesty.

“It’s cruel, just cruel. Why, in my day, one flick of a brow could bring women’s panties crashing to the floor and now there’s just no respect. I owe everything to my brows. The left one alone paid for 2 of my houses. Save The Eyebrow is a very worthy cause and gets my full backing”  – Roger Moore

“If it hadn’t been for my hairy arches, I’d never have managed to snare the hunky magic munchkin Paul Daniels and then I’d never have been sawn in half while wearing a leotard with a white rabbit stuffed in my knickers – every girl’s dream career! Save The Eyebrow is such a good cause and I fully endorse it.” – Debbie McGee

“Save The Eyebrow? Yep, add it to the list of things I’ll bang on about allllll the time.” Sting, Bono and Bob Geldof 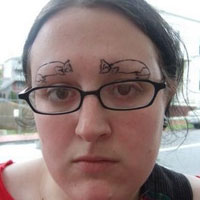 Just £1,726.00 a month will take a pair of tweezers out of action and help the clear up mission of a Sharpie spill. Your support is vital in ensuring the survival of this species in the wild, sitting proudly atop the faces of anyone who doesn’t want to look like a circus freak. Save The Eyebrow supports sustainable plucking and funds several educational centres around London (well, I point and laugh at people from my bar stool in various pubs). Don’t delay, send your payment today and the first 5 donors will receive a free gift (gifts may vary and recipients may want to scrape bin juice and potato peelings off them). Save The Eyebrow!

** If you haven’t had enough of me for one week, take a look at the marvellous Celebrity Biscuit Database, who graciously asked me to contribute some wittering**